Magnavox Odyssey 2: The Game System That Started It All

Today, you will see different gaming systems that are integrated with the latest graphics and sound technology. The games that are available in these game systems are even amazingly realistic and can really make you feel that you are part of the game and not just as a person playing it. The realistic and customizable character features in some of these games enables you to feel as if you are part of the game itself. 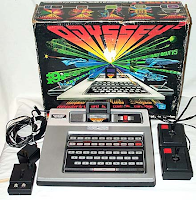 There are a lot of companies that manufactures gaming console competing in the market today. Some boasts that their gaming console can connect to the internet while other gaming consoles brags that it can have up to four different players playing locally at the same time.

With a wide library of games available today and the different gaming consoles available in the market, it is very hard to imagine that these games have evolved from a very simple and primitive beginning.

The company called Magnavox became interested in Baer’s idea and was willing to reproduce it and market it. The Brown Box is an analog system that runs on transistors and capacitors. Baer’s Brown Box underwent a number of refinements and changes before it was released by Magnavox as Odyssey in the year 1972.

Upon release, the Odyssey was the talk of the town. But because of the high price and inefficient and confusing marketing, people thought it needed a Magnavox TV to run. This confusion hurt sales badly but nevertheless, Magnavox sold almost 100,000 units on its first year.

In the year 1978, Magnavox released the new version of Odyssey called the Odyssey 2. This unit was created to compete with the growing gaming console industry. One of the features that made Magnavox Odyssey 2 stand out is the 48-key keyboard to assist in educational games. Odyssey 2 has features that are considered state-of-the-art during its time.

The Odyssey 2 technical specifications were an 8 bit Intel 8048 (1.79MHz) CPU, a 64B RAM integrated in the CPU, 16 colors and 4 on screen, resolution of 280x192, 4 sprites, 1 channel mono sound system, and a 2K programmable game card. These features were considered the latest technology in its time and Odyssey 2 was considered a success with sales that went up to over a million units.

Odyssey 2 gaming console is also integrated with one button digital joysticks, and a QWERTY layout keyboard for educational games.

Odyssey 2 also has expansion modules for different games. It can be integrated with The Voice where it provides speech synthesis and enhanced sound effects. It also had a Chess Module to run the chess program effectively.

Just think about it, in less than 30 years, game console developers and manufacturers have developed simple gaming consoles to highly advanced gaming console with the latest technology in graphics and sound in just a little time.

Today, because of the latest development in computer technology and the internet, Odyssey 2 games are readily available for online play. It is defiantly hard to imagine that all the gaming consoles you see in the market today evolved from a simple gaming console developed by a man called Ralph Baer and a company called Magnavox.

Come to think of it, if you played Odyssey 2 before, you would really want to play the old and simple games again. You can play these old games in a number of websites available. Most of Odyssey 2 games are available for online gaming for free.

Article you may be interested in reading US Game Systems
D di 12.59
Berbagi